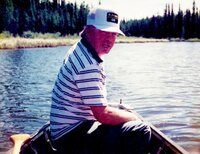 Edward “Ted” Munch March 14, 1940 – September 9, 2021 It comes with sadness that we announce the peaceful passing of Edward Munch at his home in Whitecourt, Alberta on Thursday, September 9, 2021, at the age of 81 years. Ted was born in Winnipeg, Manitoba and spent his childhood years in Fort Frances, Ontario. Before moving to Whitecourt, Alberta he and his family lived in numerous locations throughout Alberta and British Columbia. Ted met his lifelong love, Virginia, in 1964. They welcomed their only son, Kevin, in 1970. Ted served in the Royal Canadian Navy for 5 years as a Radio Operator on numerous ships including the HMCS Haida. While travelling across Canada as a heavy-duty mechanic, it gave Ted the opportunity to experience the country’s natural beauty. Spending his childhood in northwestern Ontario, Ted developed a strong passion for the great outdoors and water; he loved to swim. Ted had a devoted love for his wife, son, brothers, and sister; family was everything to him. Ted will be lovingly remembered and missed by his wife of 57 years - Virginia Rose (Mudge), son - Kevin Edward Munch (Heather), grandchildren - Sarah, Emma, Alexander, and Samantha; siblings – Joe Munch (Isabelle) and John Munch (Nina). Ted was predeceased by his parents Anton and Catherine Munch, siblings Peter Munch, Molly Stout, Lorne Munch and Tony Munch. Spousal-in-laws include Lyman and Shirley Adams, George and Joan Mudge, Rob and Helen Heller, Dale and Phyllis Callaghan, Wesley and Sharon Mudge, cousin Benthe Munk Thompsen as well as numerous aunts, uncles, nieces, and nephews. Edward’s family wish to extend their great appreciation to Dr. Ryan Roszko, the amazing Home Care and Palliative Care staff, as well as Mykenna Cabral of Affinity Funeral Service. Memorial contributions in Ted’s honour may be made directly to the Friends of HMCS Haida or to The Salvation Army. Condolences may be sent by visiting www.affinityfuneralservice.ca Arrangements in care of Mykenna Cabral at: Affinity Funeral Service Unit1 4105-41st Avenue, Whitecourt, Alberta 780.778.3330