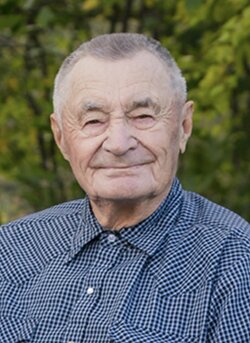 Please share a memory of Harold to include in a keepsake book for family and friends.
View Tribute Book
Harold Emmanuel Smithinsky February 27, 1934 to June 26, 2022 It is with sadness that the family of Harold Smithinsky announce his passing at the age of 88. Harold was born on the homestead at Violet Grove. He married Lillian Huseby, June 18, 1955 and together they had two daughters, Pauline and Joyce. He is survived by his wife Lillian of 67 years, Pauline (Ian Dunn) and Joyce (Dave Mathers), his grandchildren Lindsey (Dustin Bensmiller) and Jordana (Austin Fried) and the great grandchildren Luke and Mallie Bensmiller. Harold was predeceased by his father, Abraham (September 1950), his mother Tillie (September 1971) and his only sibling, George (May 1991). If anyone was born to be a farmer it was Harold. There was nothing he enjoyed more than raising animals, haying, planting crops, harvesting and growing a large garden. He was a John Deere enthusiast; you never saw any colors besides green and yellow on his farm equipment. Over the years he raised horses, pigs, chickens and most notably purebred angus cattle. His herd was known for its calm and gentle nature, reflective of the time and effort he spent with them. Harold worked as a heavy equipment operator until he retired at 60. He didn’t consider farming work and therefore continued to raise cattle until a year ago. As a true Calgary Stampeder and Flames fan in Elks and Oiler Country, he had many friendly rivalries. His interests included playing cards, hunting, fishing, bonfires and socializing with family and friends. The family requests those who wish to express sympathy to consider making a donation to STARS in Harold’s name in lieu of flowers. Condolences may be sent to www.affinityfuneralservice.ca Arrangements in care of Dewayne Henley at: Affinity Funeral Service 5001 – 45 Avenue, Drayton Valley, Alberta T7A 1L1 780.542.3338
To send flowers to the family or plant a tree in memory of Harold Smithinsky, please visit Tribute Store
Online Memory & Photo Sharing Event
Online Event
About this Event

Look inside to read what others have shared
Family and friends are coming together online to create a special keepsake. Every memory left on the online obituary will be automatically included in this book.
View Tribute Book
Services for Harold Smithinsky
There are no events scheduled. You can still show your support by sending flowers directly to the family, or planting a memorial tree in memory of Harold Smithinsky.
Visit the Tribute Store
Share Your Memory of
Harold
Upload Your Memory View All Memories
Be the first to upload a memory!
Share A Memory
Send Flowers