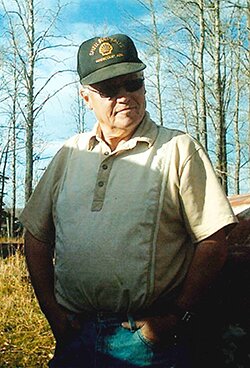 Please share a memory of Garry to include in a keepsake book for family and friends.
View Tribute Book
Garry Foster December 30, 1941 – July 6, 2022 Garry Foster, long-time resident of Alder Flats, Alberta passed away at Mazankowski Alberta Heart Institute during the early hours of Wednesday, July 6, 2022 at the age of 80 years. Garry enjoyed the time he spent watching sports; especially hockey, he liked hunting, and fishing with his family, and was an avid reader. He loved to watch WWII movies and share stories with his grandchildren. His greatest passion was his wife, children, and grandchildren. His generous nature and attentive kindness were always abundant. A loving father, tender and kind, what a beautiful memory you left behind. Garry will be lovingly remembered by his wife, Sharon; children, Steven, Mike (Julie-Ann), Trevor (Leith) and Trina (Chad) Baumann; grandchildren, Richard, Dylan, Kristoff, Ella, Caileigh, Cooper, Brianna, Ember, Sebastian, Dani and Walker; step-sons, Frank (Tammy) Oliver and Fred Oliver along with his children, Mackenna and Chasen, as well as by many extended family and friends. Garry is predeceased by his parents, Doris “Dolly” and Fred Foster and “Grandpa” Harry Foster. Garry’s life will be celebrated at the Buck Lake Community Hall on Friday, July 15, 2022 at 2:00 p.m. In lieu of flowers, memorial donations in Garry’s name may be made directly to Alberta Diabetes Foundation, 8602 112 St NW, Edmonton, Alberta T6G 2E1. Condolences may be sent to www.affinityfuneralservice.ca Arrangements in care of Joelle Valliere at: Affinity Funeral Service 5001 – 45 Avenue, Drayton Valley, Alberta T7A 1L1 780.542.3338
To send flowers to the family or plant a tree in memory of Garry Foster, please visit Tribute Store
Friday
15
July

Look inside to read what others have shared
Family and friends are coming together online to create a special keepsake. Every memory left on the online obituary will be automatically included in this book.
View Tribute Book
Share Your Memory of
Garry
Upload Your Memory View All Memories
Be the first to upload a memory!
Share A Memory
Send Flowers