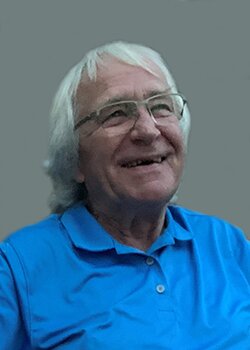 Please share a memory of Ronald to include in a keepsake book for family and friends.
View Tribute Book
Ronald Douglas Manwaring 1956 - 2022 It is with heavy hearts that we announce the unexpected passing of our dear husband, father, grandfather and friend. Ronald Douglas Manwaring passed away on the afternoon of Friday, October 21, 2022 at his home at the age of 65 years. Ron was especially proud of his family and the love he had for them was shown in many beautiful ways. For the past 25 years, Ron owned and operated Magnum Perforating Services; not only did he devote much of his time to his business, but he also made a lot of great friends and acquaintances along the way. An avid golfer, Ron could often be found at the Drayton Valley Golf Course where he spent the majority of his Alberta summer; and in Apache Junction, Arizona during the winter months. In addition to his many loves and pastimes, Ron was a music enthusiast – when you hear a Bruce Springsteen tune, take a moment to remember Ron. Ron will be lovingly remembered by his wife of 38 years, Debra; children, Britny (Lorne) Smith and Justin (Kelsey Bennett); granddaughters, Olivia and Lily; sisters, Barbara (Don) Clarke and Sharon (Ron) Walker; mother-in-law, Barbara Smerychynski and in-laws, Norma (Kim) Boles, Duane (Patty) Smerychynski, Calvin Smerychynski and Steven Smerychynski, as well as by numerous nieces, nephews and life-long friends. Ron is predeceased by his parents, Mona and Henry Manwaring; nephew, Jayson Clarke, father-in-law, Philip Smerychynski and mother-in-law, Doreen Kramer. Ron’s life will be celebrated from the MacKenzie Conference Centre, 5737 45 Avenue, Drayton Valley, Alberta on Friday, October 28, 2022 at 1:00 p.m. For those who so desire, memorial contributions in Ron’s name may be made directly to Mazankowski Alberta Heart Institute, 1220 83 Avenue NW, Edmonton, Alberta T6G 2B7. Condolences may be sent to www.affinityfuneralservice.ca Arrangements in care of Joelle Valliere at: Affinity Funeral Service 5001 – 45 Avenue, Drayton Valley, Alberta T7A 1L1, 780.542.3338
To send flowers to the family or plant a tree in memory of Ronald Manwaring, please visit Tribute Store
Friday
28
October

Look inside to read what others have shared
Family and friends are coming together online to create a special keepsake. Every memory left on the online obituary will be automatically included in this book.
View Tribute Book
Share Your Memory of
Ronald
Upload Your Memory View All Memories
Be the first to upload a memory!
Share A Memory
Send Flowers