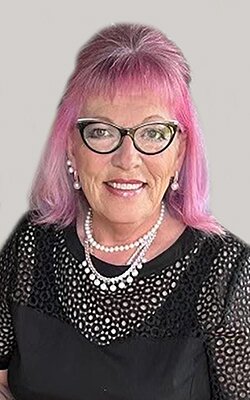 Please share a memory of Heather to include in a keepsake book for family and friends.
View Tribute Book
“You raise me up, so I can stand on mountains” Heather Lynn Rennison April 21, 1955 ~ November 8, 2022 On a frosty, yet sunlit morning, with rainbows in the sky, Heather began her final journey. Heather was born in Stony Mountain, Manitoba, to Sandy and Eunice Trupp. Inspired by her Dad’s military career, Heather joined the Militia/Reserves where she proudly served her country for several years. Military life took her family all over Canada, until they ultimately planted their roots in Edmonton, where she met the love of her life, Brian. Following their wedding in 1980, they began the next chapter of their lives together in Drayton Valley. After welcoming their two sons in 1981 and 1982, they jumped into the world of business ownership, creating Brian’s Automotive in 1987, which they loved and helped grow into a successful staple of Drayton Valley. Her positivity and zest for life brought sunshine to everyone that had the privilege of knowing her. Her fierce love for her family, past and present, was deeply rooted in everything she did. Showering her grandchildren with love and showing them the magic in everyday things brought her the greatest joy. Heather was generous, creative, thoughtful, inspirational, a beautiful soul and truly one of a kind. Welcoming her with open arms and a cup of coffee were her parents, Sandy and Eunice Trupp, brother, Don Trupp, sisters, Sandra Cameron and Sharon MacDonald, niece, Cerise Trupp, and nephew, Jon-Selby Trupp, as well as numerous other precious angels. Carrying on her legacy is her husband, Brian Rennison, son, Nick Rennison (Lisa) and their daughters Hannah and Ava, son, Chris Rennison (Cheryl) and their children Isaac, Oliver and Abigail, niece Astra (Chris) Hoffert and their daughter Annabelle, nephew Hugh MacDonald, brother Peter (Mary-Jean) Nicholson, as well as all her extended family and countless friends. A celebration of Heather’s life will be held at the MacKenzie Conference Centre, 5737 – 45 Avenue, Drayton Valley, Alberta on Thursday, November 17, 2022 at 1:00 p.m. The Rennison family would like to extend a heartfelt thank you to the Drayton Valley Hospital, STARS Air Ambulance and the University of Alberta hospital for their loving care. In lieu of flowers, a memorial donation can be made to the Stollery Children’s Hospital or STARS Air Ambulance in Heather’s honour. MIZPAH ~~ May the Lord watch over me and thee while we’re absent one from the other. Condolences may be sent or viewed by visiting www.affinityfuneralservice.ca Arrangements in care of: Joelle Valliere at Affinity Funeral Service 5001 – 45 Avenue Drayton Valley, Alberta T7A 1L1 780.542.3338
To send flowers to the family or plant a tree in memory of Heather Rennison, please visit Tribute Store
Thursday
17
November

Look inside to read what others have shared
Family and friends are coming together online to create a special keepsake. Every memory left on the online obituary will be automatically included in this book.
View Tribute Book
Share Your Memory of
Heather
Upload Your Memory View All Memories
Be the first to upload a memory!
Share A Memory
Send Flowers