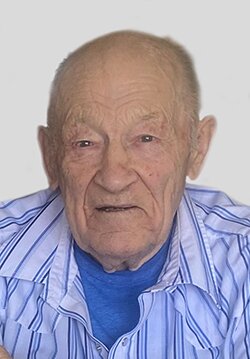 Please share a memory of "Bill" William to include in a keepsake book for family and friends.
View Tribute Book
William George “Bill” Robinson July 13, 1932 – December 10, 2022 We are filled with sorrow as we announce the passing of Bill Robinson at Drayton Valley and Hospital Centre on December 10, 2022 at the age of 90 years. Bill spent most of his time in the lumber, oilfield and farming industries. When time allowed, he especially enjoyed spending his time outdoors with his family fishing, camping or snowmobiling. He loved people and took the time to visit with his neighbours over a cup of coffee. Bill will be greatly missed. Bill will forever be lovingly remembered by his wife of 68 years, Irene Robinson; daughter, Dorothy Robinson; grandchildren, Jody Robinson and Brandon Robinson (Barb Finch); great-grandchildren, Keely and Jax Robinson; sister, Rosalie MacGregor; sister-in-law, Ivy Jorgenson as well as by numerous nieces, nephews and a ton of friends. Bill was predeceased by his son, Roger and parents, William and Rubina. Funeral Services for Mr. William Robinson will be held at Easyford Community Hall on Tuesday, December 27, 2022 at 1:00 p.m. with interment to follow at Easyford Cemetery. Bill’s family would like to extend a tremendous thank-you to Dr. Botes and the entire staff at Drayton Valley Hospital and Care Centre for their wonderful care during his recent stay. For those who so desire, memorial contributions in Bill’s name may be made directly to Drayton Valley Health Foundation’s Greatest Need, 4550 Madsen Avenue, Drayton Valley, Alberta T7A 1N8. Condolences may be sent to www.affinityfuneralservice.ca Arrangements in care of Joelle Valliere at: Affinity Funeral Service 5001 – 45 Avenue, Drayton Valley, Alberta T7A 1L1 780.542.3338
To send flowers to the family or plant a tree in memory of "Bill" William Robinson, please visit Tribute Store
Tuesday
27
December

Look inside to read what others have shared
Family and friends are coming together online to create a special keepsake. Every memory left on the online obituary will be automatically included in this book.
View Tribute Book
Share Your Memory of
"Bill" William
Upload Your Memory View All Memories
Be the first to upload a memory!
Share A Memory
Send Flowers