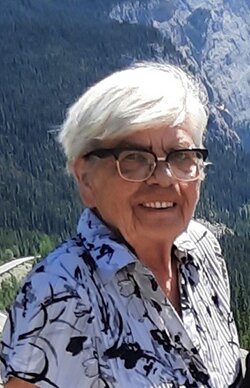 Please share a memory of Jeanne to include in a keepsake book for family and friends.
View Tribute Book
JEANNE DELORES WESTLUND February 17, 1941 – January 1, 2023 It is with a heavy heart we announce the passing of Jeanne Delores Westlund on Sunday, January 1, 2023, surrounded by her family at the Drayton Valley Hospital and Care Center. Jeanne was born to Florence and Bertil Pearson, dairy farmers in the Glen Park, AB area. She grew up as a typical farm girl, loving and caring for animals and her younger sister and brother. Their farm was a short distance from Kulm school, which she attended until being bussed to Calmar High School. She was active in sports like softball and basketball and did great academically. Love interfered with her planned nursing career when she met and married Norman Westlund in 1959. Her education turned from books to babies as she and Norm moved to Drayton Valley and began to raise a family of two boys and two girls. When the kids were all born, Jeanne went to work in ladies wear at the Hudson Bay. She also served as treasurer for Boy Scouts, a leader in Brownies, and at supporting the other activities of four growing kids while baking, sewing, and gardening. For her own time, it was bingo. Jeanne and Norm moved to an acreage near Ardrossan in 1980 to be closer to Norm’s company and Jeanne took a job at a bank in Edmonton. With most of the kids gone, and starting families, Jeanne pursued her creativity in sewing and quilting, baking and other crafts. Family had a continuous supply of bedroom sets, curtains, wedding and grad dresses, costumes, and many other things. Her baking and preserves were renowned. If Jeanne had a hint of a fault, its that she could never refuse a request for help, even if it wasn’t verbalized. Wayward kids or kittens, it didn’t matter, she would take them in. Her love for family and generosity to all was given without a negative word or thought, ever. She was a one-in-a-million angel with never a consideration for herself, only others. In retirement to Calmar, with Norm and by herself after he passed, she was able to travel to some tropical locations and made a few trips to Sweden to get in touch with her heritage and distant relatives. She continued to work with the Glen Park Hall association and doing genealogy research. Jeanne leaves to mourn and remember, her children, Greg, Larry (Marjorie), Rita (Hap), and Nancy; grandchildren Lisa, Carla, Krysta (Drew), Marci (Lord), Sarah, Michelle (Cale), Alanna (Robert), Carrie, and Nathan (Kimberly); great-grandchildren, Nick, Ava, and Carter will deeply miss her; siblings, Ferne Forester, and brother Warren (Gloria) Pearson, all of Leduc. Jeanne was pre-deceased by her husband Norm in 2012, her parents Bert and Florence, and her brother-in-law Wilfe in 2022. It was Jeanne's wish that no service be held but an interment will take place in the summer. In lieu of flowers, a memorial donation can be made directly to the Canadian Cancer Society, in Jeanne’s name. Condolences may be sent or viewed by visiting www.affinityfuneralservice.ca Arrangements in care of Dwayne Henley at: Affinity Funeral Service 5001 – 45 Avenue Drayton Valley, Alberta T7A 1L1 780.542.3338
To send flowers to the family or plant a tree in memory of Jeanne Westlund, please visit Tribute Store
Online Memory & Photo Sharing Event
Online Event
About this Event

Look inside to read what others have shared
Family and friends are coming together online to create a special keepsake. Every memory left on the online obituary will be automatically included in this book.
View Tribute Book
Services for Jeanne Westlund
There are no events scheduled. You can still show your support by sending flowers directly to the family, or planting a memorial tree in memory of Jeanne Westlund.
Visit the Tribute Store
Share Your Memory of
Jeanne
Upload Your Memory View All Memories
Be the first to upload a memory!
Share A Memory
Send Flowers