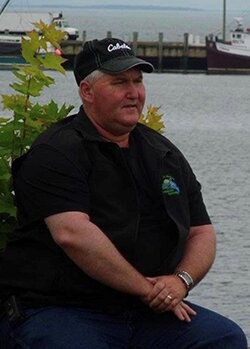 Please share a memory of Matthew to include in a keepsake book for family and friends.
View Tribute Book
Matthew Edward Pothier November 18, 1966 – January 7, 2023 It is with much sorrow that we announce the sudden passing of Matthew Pothier at Grande Prairie Regional Hospital on January 7, 2023 at the age of 56 years following a motor vehicle accident. Matthew grew up with salty sea air in his lungs and sounds of the endless waves of the Atlantic Ocean. He met and married his bride beside the sand and surf and together they raised a son. They headed west to Alberta to settle in Drayton Valley, what they now call home. Matthew was very social; a man to stay closely connected with family and friends - a family man for sure, as “grandpa”, this was his most treasured role. With Matthew you knew where you stood, and he took care of his own. Matthew was directed by his strong moral compass and he always did the right thing, even if it was hard. Matthew had an extremely strong work ethic and worked even harder when he could. In his free time, Matthew found great joy in hunting, four wheeling, or just target practicing. Matthew will be greatly missed by family and friends. Matthew will be forever be treasured by his wife of 25 years, Valerie; son, Mike (Jehanne) Harlow; grandchildren, Dean, Liam, Olivia, and Averie; siblings, Sally (Lewis), Lawrence, Lois (Herman), Earl, Roger and Laura; niece, Krista; and nephews, Glen and Luc and numerous extended family. Matthew was predeceased by his parents Lellis and Helene Pothier and sister, Rose Marie. A service honouring Matthew’s life will be held in Nova Scotia at a later date. Matthew’s family would like to thank the staff at the Grande Prairie Regional Hospital, and his fellow co-workers at Bulldog Energy for their wonderful compassion during a most difficult time. For those who so desire, memorial contributions in Matthew’s name may be made directly to Drayton Valley Health Foundation’s Cancer Unit, 4550 Madsen Avenue, Drayton Valley, Alberta T7A 1N8. Condolences may be sent to www.affinityfuneralservice.ca Arrangements in care of Joelle Valliere at: Affinity Funeral Service 5001 – 45 Avenue, Drayton Valley, Alberta T7A 1L1 780.542.3338
To send flowers to the family or plant a tree in memory of Matthew Pothier, please visit Tribute Store
Online Memory & Photo Sharing Event
Online Event
About this Event

Look inside to read what others have shared
Family and friends are coming together online to create a special keepsake. Every memory left on the online obituary will be automatically included in this book.
View Tribute Book
Services for Matthew Pothier
There are no events scheduled. You can still show your support by sending flowers directly to the family, or planting a memorial tree in memory of Matthew Pothier.
Visit the Tribute Store
Share Your Memory of
Matthew
Upload Your Memory View All Memories
Be the first to upload a memory!
Share A Memory
Send Flowers