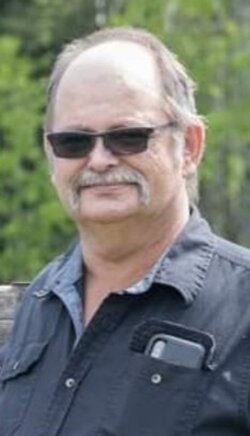 Please share a memory of "Jerry" Gerald to include in a keepsake book for family and friends.
View Tribute Book
“Jerry” Gerald Donald Jonzon August 19, 1963 – January 11, 2023 It is with the heaviest of hearts that we announce the passing of a wonderful son, father, grandfather, brother and friend. Jerry passed away at University of Alberta Hospital during the early hours of Wednesday, January 11, 2023 at the age of 59 years. Jerry was born in Drayton Valley to Donald and the late Yvonne Jonzon, and remained a life-long resident. Jerry was a gravel truck driver; a career he very much enjoyed. When not working, he took pleasure in hunting, fishing, camping and going for drives. Jerry had a special bond with his two dogs who provided him with constant companionship. Above all, his greatest love was his family. Jerry will forever be lovingly remembered by his children, Dwight (Danielle) Jonzon and Samantha McPhee (Dennis Bogart); grandchildren, Darian McPhee, Chase Jonzon, Shaye Jonzon and Tori Jonzon; father, Donald Jonzon; brother, Rick Jonzon and sister, Christine (Wayne) Kuyek, as well as by numerous aunts, uncles, cousins, nieces, nephews and friends. Jerry was predeceased by his mother, Yvonne Jonzon, brother, David Jonzon and sister-in-law, Cindy Jonzon. Funeral Services will be held at the MacKenzie Conference Centre, 5737 45 Avenue, Drayton Valley, Alberta on Wednesday, January 18, 2023 at 1:00 p.m. Those who wish to pay their respects are invited to do so before the Funeral Service, between the hours of 12:00 p.m. and 12:45 p.m. For those who so desire, memorial contributions in Jerry’s name may be made directly to the Drayton Valley Health Foundation - Dialysis Unit, 4550 Madsen Avenue, Drayton Valley, Alberta T7A 1N8. Condolences may be sent to www.affinityfuneralservice.ca Arrangements in care of Joelle Valliere at: Affinity Funeral Service 5001 – 45 Avenue, Drayton Valley, Alberta T7A 1L1 780.542.3338
To send flowers to the family or plant a tree in memory of "Jerry" Gerald Jonzon, please visit Tribute Store
Wednesday
18
January

Look inside to read what others have shared
Family and friends are coming together online to create a special keepsake. Every memory left on the online obituary will be automatically included in this book.
View Tribute Book
Share Your Memory of
"Jerry" Gerald
Upload Your Memory View All Memories
Be the first to upload a memory!
Share A Memory
Send Flowers