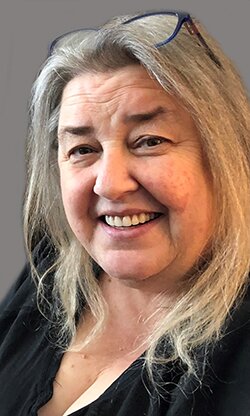 Please share a memory of Debra to include in a keepsake book for family and friends.
View Tribute Book
Debra Elayne Wilson May 30, 1961 – January 19, 2023 Debbie was born on a gentle rainy day in Calgary, Alberta, the moment she arrived the clouds parted, and the Sunshine filled the skies. Mom and Dad moved to Drayton Valley shortly after and Deb’s journey began to take shape. Her childhood was filled with amazing moments, cuddling behind Dad on his hip, his hand on her head, snuggling with Mom and being teased by Kim, Ross and Billie Jo. Debbie’s Prince arrived to rescue her on New Year’s Eve 1982 in a ’79 blue chevy short box. The world stopped that day for Debbie, all of her dreams came true. One year later Brady got down on one knee and her life became the ultimate fairy tale. Deb and Brad welcomed little Rufus on May 7, 1987 and their lives were filled with love and sunshine forever. In 2012, Adam added to the family with Ang and soon after the Greatest gifts were bestowed on the Family – Two Beautiful Bugs were born on March 24, 2017 and made their family complete. Debbie’s world completely changed and those babies, Addisyn and Walker, filled her every moment with more joy and happiness then Debbie could have ever imagined – she had become the most Amazing Grandma and Brad and Deb spent every moment immersing themselves in their family. Debbie was the truly the Sunshine in everyone’s world, the daughter that everyone dreamed of having, the sister that made you giggle every moment, the most amazing best friend you could ever have, the Mom you wished you had and the Wife that made your world the absolute best place to be. Deb was predeceased by her brother, Ross Howard Gebhardt (1984), her Dad, Howard Harold Gebhardt (1991) and her Mom, Jill Cora Gebhardt (2022). Her fur babies Buddy (2005) and Abbie (2022). Debbie is survived by her husband, Brad, their son Adam (Angie, Addysin and Walker), daughter Heather (Halle), her baby sister Billie Jo (Roli, Marley, Millie and Tino), sister in law Heather (Amy, Dean, Xana, Layne, Jesse, Nicole, Tilley, Griffin, Genaro) her Godson, Cody (Rhiannon, Abbey, Logan), Goddaughter Ariella and her adopted brother Terry. Debbie’s Love and Sunshine will live on in all of our hearts and souls for eternity and her legacy will continue to bloom through her many loved ones. Debbie’s life will be celebrated from the Chapel at Affinity Funeral Service, 5001 45 Avenue, Drayton Valley on Saturday, February 4, 2023 at 2:00 p.m. Condolences may be sent or viewed by visiting www.affinityfuneralservice.ca Arrangements in care of Joelle Valliere at: Affinity Funeral Service 5001 – 45 Avenue Drayton Valley, Alberta T7A 1L1 780.542.3338
To send flowers to the family or plant a tree in memory of Debra Wilson, please visit Tribute Store
Saturday
4
February

Look inside to read what others have shared
Family and friends are coming together online to create a special keepsake. Every memory left on the online obituary will be automatically included in this book.
View Tribute Book
Share Your Memory of
Debra
Upload Your Memory View All Memories
Be the first to upload a memory!
Share A Memory
Send Flowers