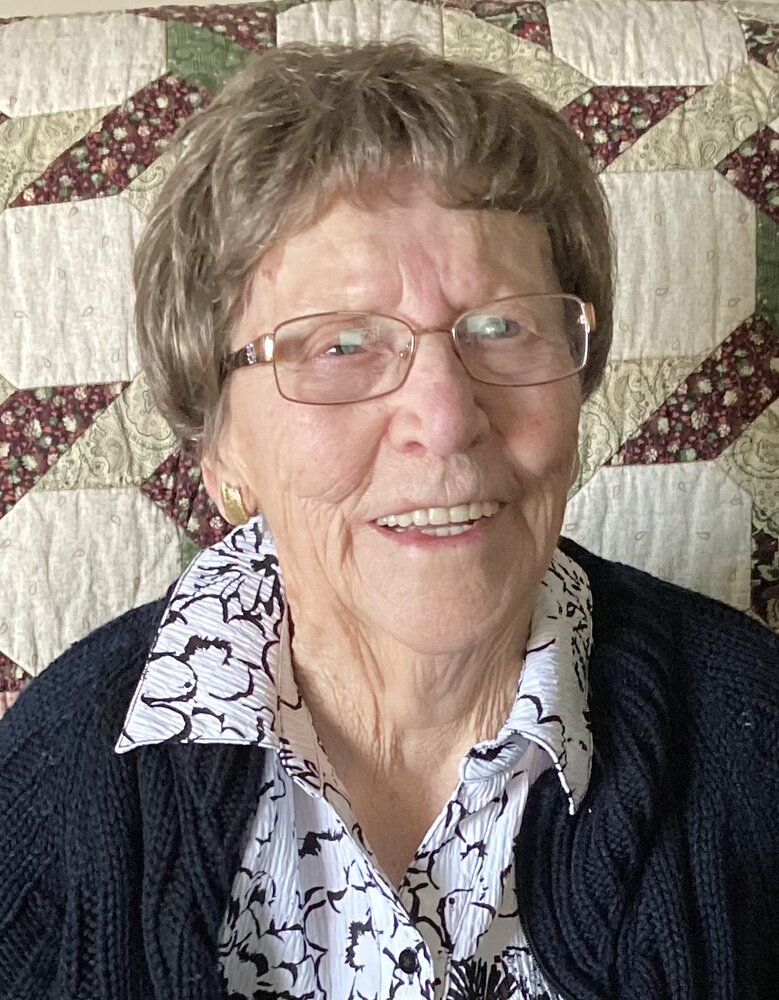 Please share a memory of Frances to include in a keepsake book for family and friends.
View Tribute Book
Frances “Louise” Tucker (Lainchbury) October 11, 1922 – January 23, 2022 With heavy hearts but much gratitude for her long and fulfilling life, we say goodbye for now to our strong, loving family Matriarch, Louise Tucker, who passed away peacefully in her cozy room at Points West in Drayton Valley, at the age of 99. She knew all of her grandchildren and great grandchildren and shared memories of them right up until she became unresponsive. Thankfully, she was able to meet Bailey’s new baby and the last words she spoke were “bless your little heart”, an expression all the kids heard many times. Her love for each of them made them feel special. Mom was born October 11, 1922, in Lakesend, Alberta, which is near Hughendon. In 1939, after 7 years of drought, she relocated with her family to Drayton Valley, where she met our dad. Soon after, at 16 years of age, she moved to Edmonton and worked as a house-maid for a retired Professor’s family. She then worked at Snowflake Laundry and lastly as a book binder at Hamley Press. She and dad married in 1943 and purchased the farm on which dad grew up, (where Weyerhaeuser is today), from dad’s parents. In the early days, mom worked tirelessly on the farm. It was particularly hard in the winters, when dad was away working in lumber camps, when both animals and children needed tending, and the woodbox had to be constantly replenished. She was so very thankful for the neighbors, especially the Herndons, for always being there for her. After the oil boom in 1953, everything changed and life was easier. Mom loved to socialize, and enjoyed curling, bowling and golfing and spending a lot of time with the grandchildren. Each has so many wonderful memories of spending time with grandma and grandpa on the farm. In 2005, they moved to town into the duplex. After dad passed away in 2010, mom lived there alone until March of last year, when she fell and broke her hip. She spent 6 months in the hospital and was thrilled when Points West opened and she was one of the first to move in. We will be forever grateful for the many caring nurses at the hospital, for the wonderful staff at Points West whom she praised and loved and for Dr. Gossman whom mom considered her friend. She is survived by her 4 surviving children, Gordon Tucker (Val), Darleen Broadbent (Raymond), Iona Hutzal (Eddie) and Greg Tucker, as well as 13 grandchildren and 26 great grandchildren. She also will be missed by her remaining sibling, Albert Lainchbury, many special nieces, nephews and friends – especially Anne who called her nearly every day. She was predeceased by her husband, Leslie, son Tom and great granddaughter, Marina. Louise was also predeceased by her parents, Alfred and Frances Lainchbury; siblings Isabel Johnson, Thelma Johnson, Alfred Lainchbury (4 Years old), Elwin Lainchbury, Iona Bennett, Walter Lainchbury and Margaret Gauthier. The many happy memories and positive influences you have had in our lives will always be with us. Thank you Mom/Gramma. The family is planning to have a memorial service in May, 2022, if Covid restrictions have been lifted. Condolences may be sent by visiting: www.affinityfuneralservice.ca Arrangements in care of Dwayne Henley at: Affinity Funeral Service 5001 – 45 Avenue, Drayton Valley, Alberta T7A 1L1 780.542.3338
To send flowers to the family or plant a tree in memory of Frances Tucker, please visit Tribute Store
Online Memory & Photo Sharing Event
Online Event
About this Event

Look inside to read what others have shared
Family and friends are coming together online to create a special keepsake. Every memory left on the online obituary will be automatically included in this book.
View Tribute Book
Services for Frances Tucker
There are no events scheduled. You can still show your support by sending flowers directly to the family, or planting a memorial tree in memory of Frances Tucker.
Visit the Tribute Store
Share Your Memory of
Frances
Upload Your Memory View All Memories
Be the first to upload a memory!
Share A Memory
Send Flowers